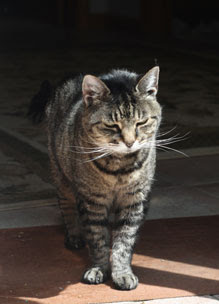 Remember owr Grammie an Dan's girl cat Sydney? Her beans have a question on somefin dat's going on wif her. Seems dat she is talkin' REAL LOUD, well, cryin' in human language an day can't figure owt why. It all started when she went to da vet in February and when she came home it started. She cries ten times den stops. Den she cries ten times more den stops.

She just came back from a looonnng visit to the v.e.t. to haf some of her teef stolen (ACK! what's up wif all da teef stealing goin' on???). When she finally came home she cries even LOUDER! Sometimes when her daddy talks to her he can get her to stop but usually not. Ten cries and then she eats like a pig. Ten cries more. Goes to the litter box. After da litter box cries ten more times. And cries ten times some other times. The v.e.t. says her little box functions are ok but she has slight kidney disease. She is 16 years old. For the most part has been in great health. She eats Fancy Feast and a few months ago they changed the kind of Fancy Feast she eats to the kind wif vegetables in it. Mom thinks that might be part of the problem. Schmaybe it's giving her gas. hee hee.

Syd's humans wanted us to ask da blogosphere if any of yoo haf heard of anyfing like what's goin on wif her. We said schmaybe she is turning into a meezer but dey said she's efun louder dan dat! Sammy an Miles -- can yoo believe dat?
Posted by Tommy and Teaghan at 7:22 AM 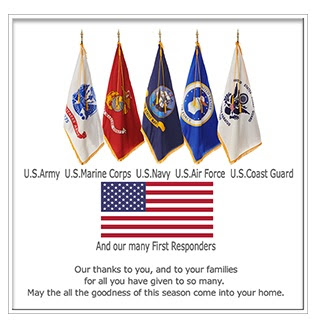 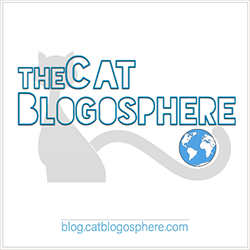