Angie and her floofy tail 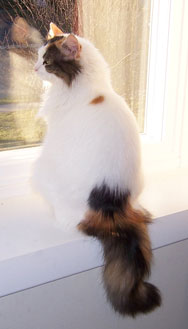 I'm really missing my beautiful Angie.  I was looking back at the blog, thinking back to the days when we first got Beau Beau and Angie.  I'm getting ready to create a book from the blog.  This picture is from a post back in 2006 shortly after I first started blogging about them.

We are sure that when it's the right time, we will know to find some other loving felines to fill our lives once again.

I went to a fund raiser for the Meriden Humane Society (where we found Beau Beau and Angie in 2005).  The speaker was s a local psychic medium.  I had never been to see one before but have always been interested in life after death so I thought it would be interesting to say the least.  I had signed up for this before Angie passed away.  So before I went I thought hmmmm, wouldn't it be great if Angie came through?  Since she had been gone only a few days I felt she would be right there close to me.  Everyone says your loved ones are always around you always, right?  On the spiritual level, I realize that animals do not have the same energy as humans.  So it would have been a reach for her to come through especially since the room was filled with 100+ people which meant 100+ people and all of their spirits that come with them.  I found out it's a lot for a medium to handle.

It was a very interesting event, with many people hearing their loved ones come through.  And yes, finally, I heard Vanessa say, "Angela, Angie?"  I didn't quite believe she said "Angie".  So I didn't say anything.  Vanessa made her way around the room until she was in front of me and was talking to someone else.  Then she looked at me and said "is there someone you want to hear from?"  I said no, then I said well, yes, my cat Angie. She and a couple other people said " she said Angie before".  It was such a weird feeling to know that she really might have gotten through.  So when she said did she have a really big tail - I said yes - while thinking skeptically, that's a 50/50 call... Angie did have a really big tail though as can be seen by the many pictures in this blog.  The picture above is a perfect example of how furry her tail really was.  As she got older it was less full but I was thinking when people come through the medium they usually show up as a much younger and happier version of themselves as well.  When I saw the older pictures of Angie I made the connection that she too had come through as a younger healthier version of herself.

Then Vanessa said "I see the number 8".  She was wondering if it was perhaps Angie's age, or to do with another cat.  Later that night as I was thinking about it, maybe it wasn't "8" but "ate".  I was doing all I could to get Angie to eat that last week of her life.  Was she saying she finally "ate"?  I only hope it was something as simple and loving as that.  Or it could be as someone had suggested, the number 8 as the infinity symbol which is heart warming to think of as well.  One can only guess.  I'm just happy to feel that she really might have been there reaching out to me and that she is really here whenever I need to reach out to her or need her love.

Blessings,
Brenda
Posted by Beau Beau & Angie Over the Bridge at 7:43 PM